The New Work of Composing: Standards in the Making 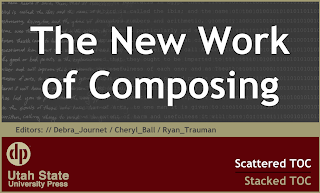 Standards in the Making:
Composing with Metadata in Mind
This chapter argues for the relevance of metadata (especially folksonomies or descriptive metadata) to the future of new media composition, using a nonsequential design. Using the Library of Congress' pilot project with Flickr as a case study, we show the various ways that metadata can be interpreted as an ambivalent social practice, which both accommodates and resists formal standardization.
Labels: composition digital humanities gis metadata qualGIS