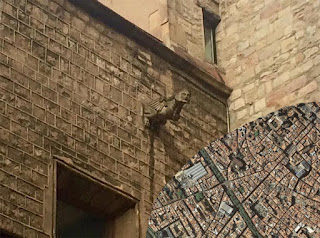 Last Spring, I co-organized (with Tim Cresswell) the annual conference of the Harvard Center for Geographic Analysis, where I continue as a visiting scholar (although visiting more infrequently!). The topic was Space, Place, and Geographic Thinking in the Humanities; see the conference program here. My closing remarks come from an earlier draft of my forthcoming book, tentatively titled New Lines (also from a piece for The Canadian Geographer). The text of these comments follows, along with a video (which captures a short discussion with Tim on mapping and space).

Geographic information systems are more than what GIS users and developers tell us they are. This advice extends a position held by Brian Harley in 1989 regarding the field of cartography--precisely the kind of suspicious attention that propels much so-called critical thought toward technology. Indeed, there is more to the story. Isn’t this always the case? Harleian suspicion belies a dangerous implication--that the use of GIS runs counter to reasonable, situated, and radical knowledges. To call into question those stories told by users and developers of GIS effectively establishes an inside and an outside of critique, a war of either/or. But it is not productive to insist that you are either with us or against us. Other paths are and have been possible. The purpose of what follows is to walk the path between practice and theory. The point is to trouble all too easy distinctions, not to resolve them, but to live them, to stay with the trouble, as Haraway would insist: cartography and GIS are made, not made up. Or to invoke Deleuze and Guattari, we must trust the conjunctive force of the rhizome: “and…and…and…”, always addition, never subtraction.

Mapping technologies occupy a curious status in society. Profoundly, they are objects of publicity, to translate the real world and our being within it--from the earliest TO maps and mappa mundi to the release of Google Earth in the web browser. At the same time, they are objective, the products of technicians, expertise, science.

Those who know me, know that I can’t resist returning to the Gothic Quarter of Barcelona. And the role of mapping in society is palpable, here. Wanderers of the Gothic Quarter are reminded of the power of this most basic technocultural phenomena: the reading of a map. Captured within its medieval streets, visitors unfold paper maps in absence of their digital counterparts. GPS is highly undependable here, with narrow, winding paths and several story stone buildings closing in what intimate public space exists. Visitors contort the map and their bodies to orient to this place. They trace with their fingers the path traveled. They gaze upwards, past the gargoyles and bell towers, attempting to sort north from south, east from west, mountain from sea, largely in vain. In this moment, one can feel the pervasiveness of the location-aware society. The absence of digital devices can leave us feeling peculiarly vulnerable. For some, being lost has become a more acute sensation. How did we arrive here, now? What are the implications for these devices and practices that swaddle us in location-rich media, for these new lines that draw us in?

The last century of mapping work has brought about incredible opportunities for the line, with a frenzy of disciplinary subfields that travel under the banner of mapping, and yet extend liberally into many modes of thought, inquiry, representation, and habit. Across many of these developments has been a particular theory of action--which might also be called practice--wherein a difference is made and the world is intervened. From the drawing of a line connecting one node to another, the spaces and places of our discursive and material realities form and in-form. This theory of action, which might also be understood as a force or an affect, is what compels both the drawing of a line and the tracing of a line. I understand drawing and tracing as fundamentally distinct, yet complementary, theory-actions, that the drawing and tracing of a line is both territorializing and deterritorializing, both stratification and destratification, to invoke Deleuze and Guattari. There are those who draw and those who trace; each practice has a politics, and their attendant black boxes confound the novice. Representations of this sort are thus always-already more-than-representational.

The line, drawn by us, in turn, draws us in. The subtleties of a drawn line and the affective force of its presence or absence is integrally part of a theory of action that stretches across and assembles the various permutations of mapping practice. Put simply, this is a call for tracers who draw, and drawers who trace, and a recognition of the urgency of such hybrid positions, of these kinds of monsters.

This will require more of us--both a greater involvement of geographers and non-geographers and more out-of-the-box thought and action within our ranks. That a single point does not form a line, summarizes this requirement. It serves as a kind of manifesto for a renewal of critical mapping practice, recognizing that this work cannot reside only within the single point of an individual, a discipline nor subfield--a center nor an institution. Instead this work must--under these new mapping conditions--be part of an expanding constellation, where connecting the dots with new lines is the making plastic of our most prized mapmaking habits.